After all the hard work, we put on five good performances of 'Minimus the Musical' in London and Monmouth. Over 1000 people saw the show -750 in Monmouth and 250 in London. Several schools were able to come, including a Prep school which has not yet used Minimus. Their dynamic teacher of Latin came to the June training day, was hooked, has persuaded their Head to introduce it in Yr 4 & 5 and brought a group to see the show. (and has written a very complimentary email!) Many of our sponsors such as Peter Wiseman, Anthony Bowen, Christopher Liddle, Jeremy Morse & Belinda - all of whom have been very generous to Minimus - attended one of the performances. 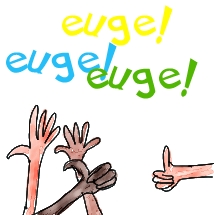 I was very proud of the cast and the orchestra also sounded good. We came up to London in a huge coach complete with all the instruments, costumes and props, including Barates' cart, specially made for this production by a member of our DT department!

The DVD of the Musical is now available at a cost of £16 plus postage. Click here for an order form.

This year we are holding two training days in November at James Allen's Girls' School, Dulwich, London.  Details are following:


Sat 10 November 2012: This training course is for all those new to using Minimus. The day will include an overview of the content and principles of the book plus information on how the Primary Latin Project can support you in your teaching. We will explore how to teach Minimus in a club situation as well as on the timetable.


Sat 24 November 2012: This day is designed to help those who have experience in using Minimus. We will look at Minimus as a cross-curricular subject; strategies for helping children to learn vocabulary; the use of games in the classroom etc.

All training days cost £60 per delegate for a full day including lunch and course resources.

If you have any queries or would like an application form, please contact
PLP Administrator:  Nicola Prince:  nicolaprince99@hotmail.com

Posted by Nicola Prince at 05:27 No comments: